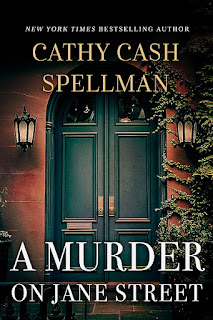 Praise for A MURDER ON JANE STREET

"Family ties tighten and bonds of affection grow stronger as a family is trapped between ruthless forces struggling for the highest stakes: control of a world to be subjected to unimaginable evil. As.parents, children and loved ones risk all to protect one another, events accelerate towards a conclusion that is in doubt until the last page is turned. A terrific read!" ―Richard Gid Powers author of The Mystery of the Trinity

"A MURDER ON JANE STREET is a gripping summer thriller filled with history, adventure, and an intriguing mystery. Cathy Cash Spellman will keep readers on the edge of their seat" ―Charles Brokaw, New York Times Bestselling author of The Atlantis Code

Cathy paints a picture with the most radiant phrasing and colorful words! I’m a fan of her books and have read every one of them, always wishing that she’ll write more! That hope was answered with A MURDER ON JANE STREET. This compelling gem of a mystery is also a history, a conspiracy, and a modern-day morality tale rolled into one. Yes there is a murder, deadly secrets, and treachery, but at its heart, it’s also about family, friendship and having the courage to do the right thing in the face of nearly insurmountable odds. This brilliant author has created yet another home run! Her narrative, coupled with an edge-of-your-seat contemporary mystery thriller, has characters that warmed my heart and an unexpected ending that I absolutely LOVED! ―Adria de Haume, author of Cross Purpose 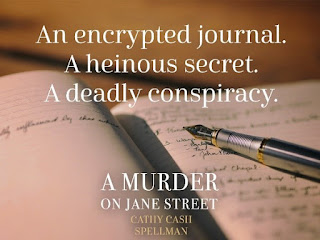 "Do NOT read this book unless you are willing to be seduced by a dozen incredibly keen people without whom the world as we know it might cease to exist." ―K.T. Maclay author of Beginners Guide to Death and Dying in Oaxaca. A brutal murder. A heinous secret. A deadly conspiracy. 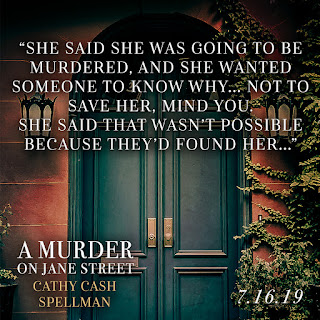 The brutal murder of the little old lady next door puts Fitzhugh Donovan on the case. A retired New York City Police Chief, he knows a cover-up when he sees one and his Irish Cop conscience can't let that happen. Now, Fitz, his family and his quirky band of Bleecker Street Irregulars are ensnared in the bizarre secret the woman died to protect. Is this a 75-year-old cold case turned hot again, or an unspeakable crime-in-progress that could alter the course of the world? Fitz doesn't yet know how high the stakes are, that failure isn't an option, and that the little old lady was so much more than she appeared. But he's trying to keep everyone alive long enough to find out. Characters you'll care about, dark shocking secrets, and disturbing similarities to today's political scene, will keep you turning pages to an ending you won't see coming. 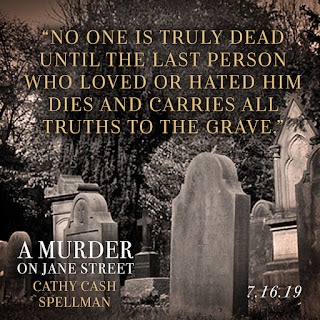 "A Murder on Jane Street" is a mystery thriller. Fitz Donovan, a retired police officer, found out their next-door neighbor, an elderly lady, was killed when he goes over there to collect something. While at her house Fitz finds diaries. This is when the mystery story begins.  Fitz works with his family and friends to figure out who and why this ninety-year-old woman was murdered. Through investigation and research, they are surprised to have found she is possibly hiding secrets involving Hitler's fake death and an elaborate plot to see the rise of the fourth Reich to fulfill Hitler's long term plan of world domination. Can Fitz team save the world and figure out what this lady is doing?

Spellman does a great job of creating some very quirky characters, but relatable at the same time. I felt for these characters and worry about them.  Fitz is a stubborn and very good with what he does.  Except Fitz is being dismissed by the current police detective who only sees him as an over the hill cop who doesn't understand the new way of investigating. A lot of books I read with tons of characters, like this book, I find it really hard to figure out who is who, but not with "A Murder on Jane Street." Spellman gave each character their own unique traits to set them apart from each other.
I love the name of his team Bleeker Street Irregulars.
His team consists of:
Finn's talents in photography.
Annie led the scientist/hackers
Maeve-  (Daughter),
Rory- talent in research.  (Granddaughter), Fitz (Maeve's long-time friend), Dec, and a host of others including Maeve's business partner, Finn's childhood friend, scientists, physicists, and computer savy hackers.
We learn retired New York City Police Chief FitzHugh Donovan owns a bookstore with his daughter and granddaughter.

Spellman does a great job of blending genres and themes in the book. You have a conspiracy theory, mystery, suspense, thriller, action, political, family, relationships, and secrets.
The story is told in through multiple POVs. Has so many twists and turns. The pace of the book was well done. Spellman had just enough details to paint a picture in your brain but not too much to make it drag.

It was very hard putting down this book. I would highly recommend reading this book.


Multiple New York Times and International Bestsellers, a Paramount Movie, book sales in 22 countries, Cathy Cash Spellman writes stories about love, friendship, adventure, and history. Known for her big sprawling sagas and memorable characters, Cathy writes the kind of stories women like to lose themselves in, and then remember long after the book is done. Her books range through several genres: contemporary, historical, mystery, mystic and romance. Several take place in two time-frames, both current and historical.Bless the Child was a Paramount movie in 2000, starring Kim Basinger and Jimmy Smits, and Paint The Wind has been optioned for film and TV.Cathy is an Astrologer, Martial Artist (Black Belt Goju Ryu Karate) and has expertise in Chinese Medicine, several alternative healing modalities and many metaphysical disciplines.She has written for Self, Harper’s Bazaar, Town & Country, Mademoiselle, Cosmo, Penthouse, Mode, Kung Fu and many other magazines about women, health, empowerment, sexuality, spiritual philosophy and Astrology. She blogs for The Huffington Post and The New York Times.
WEBSITE: https://www.cathycashspellman.com/
TWITTER: @CCashSpellman
GOODREADS: https://www.goodreads.com/author/show/95409.Cathy_Cash_Spellman
FACEBOOK: https://www.facebook.com/cathycashspellman/
INSTAGRAM: https://www.instagram.com/cathycashspellman/

Facts about A MURDER ON JANE STREET
- It’s a book of a Mystery/Thriller series set in New York City.
- It takes place in Greenwich Village, my favorite place in New York—but it also ranges to other places here and in Europe.
- The Donovan family and their quirky friends have each other’s backs.
- I researched the history for several years and learned a lot about the secrets of WWII.
- Four generations of family and friends are involved.
- There’s great diversity among the characters in gender, race, and economic status.
- There’s plenty of truth entangled in the fiction.
- I want each further book in the series to highlight one of the characters.