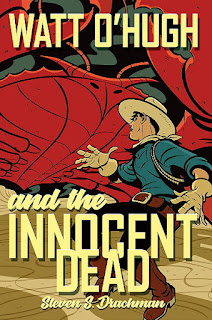 Praise for WATT O'HUGH AND THE INNOCENT DEAD

"The third entry in Drachman'sseries (after Watt O'Hugh Underground) dives right into a complex world of time travel, lost love, faith, war, and the afterlife. The titularRoamer -- a time traveler with cowboy flavor -- is hoodwinked into getting good and dead. He wakes up in the Hell of the Innocent Dead, a place of Chinese myth devoted to those unjustly dead whose murderers still walk free.... VERDICT: Genre mashup devotees should get some good laughs and thrills from this Western/adventure/sf/fantasy blend." ―Nicole Steeves, Library Journal

I did not imagine that evening might find me sprawled beneath a great and ferocious sand crab on a rancid beach, deep in the Hell of the Innocent Dead.

But that is indeed where I wound up.

The moral, if there is one: never plan your day too inflexibly.

THE WAIT IS OVER: THE CLASSIC ADVENTURE CONCLUDES....

In this, the final book of the trilogy, Watt O'Hugh, the dead/not-dead, time Roaming Western gunman, travels the length and breadth of the sixth level of Hell, recruiting a shadowy army that might storm the borders of the Underworld, free humanity and the inscapes from the clutches of the Falsturm and his Sidonian hordes, and stave off the Coming Storm.

You can purchase Watt O'Hugh and the Innocent Dead at the following Retailers:

Watt O'Hugh and the Innocent Dead is the third book in Steve S. Drachman's fantasy book series.  I did not read the first two books I suggest you do because there is a cliff hanger from book two.

Drachman takes you into Wild Wild West world with a modern Sci-Fi twist. There is time traveling involved too. How can you not like a book about this? Watt who is an orphan and adventurer. He is compassionate. His compassion earned him the protection of ghostly children.

The book feels a lot like a first-person diary. He has a lust for life and beautiful women. He falls in with a coven of strange time-traveling sorcerers. Time-traveling allowed him to learn many things not the norm for men in 1863. Is his love, Lucy Billings, a good thing or is a villain who wants to ruin his life? Throughout his journey, he runs into some unusual characters. His responsibility is to save humanity from the darkest of dark evils in all of fantastical fiction.


Drachman does comedy really good. The pacing, witty dialogue, indelible characterization was well done. I laughed here and there while reading. It is a touching tragedy, dead-pan comedy, and a fun mystery. This is Watt O'Hugh's final adventures.

"Received this book from Jean Nerd. I was not required to write a positive review. This is my honest review."

Steven S. Drachman is a writer and critic whose work has appeared in The New York Times, The Washington Post, The Village Voice, The Boston Phoenix, The Chicago Sun-Times, and Entertainment Weekly. He has also written on the Middle East for the IsraelPalestinePeace e-zine and in the Kindle single, Enough Already: A Framework for Permanent Peace, which was the basis for a Ted Talk in 2014.

His first novel, a Western sci-fi historical fantasy entitled The Ghosts of Watt O'Hugh, was named one of the Best of 2011 by Kirkus Reviews, and Winner, Best Fantasy Novel by Indie Excellence Book Awards 2012. Book 2 of the Watt O'Hugh trilogy, Watt O'Hugh Underground, was published by Chickadee Prince Books in 2014, to equivalent acclaim. The final book of the trilogy is Watt O'Hugh and the Innocent Dead.

Rafflecopter Link (Needs to be added on your post)
--Giveaway is open to International. | Must be 13+ to Enter

-  5 Winners will receive a copy of WATT O'HUGH AND THE INNOCENT DEAD by Steven S. Drachman.

(for use by those who cannot embed HTML on their blogs)