Showing posts from November, 2019
Show all

The Conman by Mike Murphey Book Spotlight and Giveaway

ABOUT THE BOOK Sports Fiction (Baseball) Publisher: Acorn Publishing Date Published: November 11, 2019 Conor Nash has lived his life with a single purpose—to pitch in the Major Leagues. He’s been released from professional baseball contracts ten times over a sixteen-year career, but he’s overcome every obstacle to finally reach The Show when he’s a decade too old. As he faces the specter of injury-forced retirement, he becomes a man neither he nor his wife recognizes. During his career, Conor avoided the trap of alcohol and drugs because his drug was baseball. And what can an addict do when he realizes he will never get that high again? Conor climbs treacherous Camelback Mountain, drinks a bottle of Champagne, recalls people and events, and seeks an answer. Who is Conor Nash if he can’t pitch? The Conman is based on the Life of Keith Comstock. Keith pitched professionally for sixteen years,
1 comment
Read more

Edj of the Empire: Revenant's Omen by Timothy Burns Book Spotlight and Giveaway

ABOUT THE BOOK Empire of Ninety-Nine Stars book 2 Science Fiction/Adventure/Space Travel Date Published: 11/21/2019 Publisher: Chandra Press The riveting second installment in the Edj series. How do you stop an enemy that can see the future? After the harrowing events of Herrig’s World, Edj is hot on the trail of D’Orneo. His pursuit leads him to Villalba, a world of tropical island paradises where over a hundred thousand luxurious resorts cater to every whim or flight of fancy. Fortunes are won and lost on Villalba twenty-nine hours a day in the casinos that never close. Gambling on anything for anything from cards to shark fights, dice to gladiators; if it can be wagered on, it can be found on Villalba. Edj arrives to find that the once powerful economy of Villalba has ground to a halt. A new drug, Peek, grants users the ability to see the future. The casino industry is in tatters
2 comments
Read more

ABOUT THE BOOK Philanthropy Book 2 Science Fiction/Fantasy Publisher: Chandra Press Date Published : 11/14/2019 The exciting sequel to Fusion World. A world on the brink. A team divided. It’s been months since Vai and Edam disappeared through the portal created by the destruction of the Fusion World machine. Unfortunately the machine contained the last known Dark Orb, the critical component to interdimensional travel. Luckily, a prototype is found in the vault of its creator, Dr. Charles Vindia. Vint SawWood, Vindia’s protégé, is pressed into service and can reactivate the device. But it is decades old and may only work once. There is no way to know. Undaunted, Sajaeler and Raven lead a mission to find and rescue their missing teammates. What they discover is a world in the midst of a civil war. A shapeshifter has rallied an army of disaffected citizens to his cause and will st
1 comment
Read more

Rich and Gone by W.F. Ranew book Spotlight and Giveaway

ABOUT THE BOOK Mystery Date Published: May 29, 2019 Publisher: Tirgearr Publishing PI Red Farlow is on the hunt to find $300 million a Florida insurance executive has bilked out of family and friends. Woody Cunningham stashed the money in safe havens around the world before disappearing. Has he been done in by one of his enemies? Or did he skip town with his girlfriend to live off the ill-gotten wealth? If that’s the case, where is he? Farlow must quickly learn how and why people hide their money in offshore accounts if he's to find out what happened to Cunningham. When a tough guy from Farlow's past resurfaces, wanting to settle an old score, Farlow discovers he also has links to the missing man. Clues lead him across Georgia and Florida, and Europe, to find the answers. Is Woody Cunningham dead, or just rich and gone? ABOUT THE AUTHOR W.F. Ranew is a former n
Post a Comment
Read more

ABOUT THE BOOK Jesse Alexander, #1 Urban Fantasy/Paranormal Publisher: Pen & Page Publishing Date Published: May 11, 2017 During Starfall, magic flooded the Earth and destroyed most technology while humans developed strange new powers. As the scion of a male-dominated clan, Jesse should have risen to become a hero. One disastrous choice ruins her hopes for the future. To forget about her life as an assassin, she heads to the dying coasts of Florida. Unfortunately, a chance encounter with a Starfall stone and the Siberian tiger shifter after it thrusts her into the limelight. Escaping Nate’s sights is only the beginning of her woes. When two dangerous Starfall stones are stolen, it’s up to Jesse to recover them. Should she fail, she’ll only be the first to succumb to the rogue stones’ powers. ABOUT THE AUTHOR RJ Blain suffers from a Moleskine journal obsession, a
1 comment
Read more

KINDLE FORCE - A PROMOTIONAL BLAST CREATED BY JEANBOOKNERD A  special promotional price  ($.99) for  A MURDER ON JANE STREET   E-book will be set for the duration of the event. Make sure you get your copy now!     Praise for CATHY CASH SPELLMAN “...Almost impossible to put down. The Author has the ability to produce one powerful scene after another and the action draws you helplessly on...” ― Publisher’s Weekly  on S o Many Partings “...A cross between The Thorn Birds and Ragtime...” ― ALA Booklist  on  So Many Partings “Flows along with an inexorable narrative current that propels the readers from one involving episode to the next.” ― Booklist  on  So Many Partings “An energetic plot that never takes a breather.” ― Kirkus  Reviews on  Paint the Wind “A western extravaganza.. a plot teeming with outsize characters.” ― Publishers Weekly  on  Paint the Wind “I have never read a book or connected with an author who has touched me so deeply – as a mother, a grandmother, a
Post a Comment
Read more 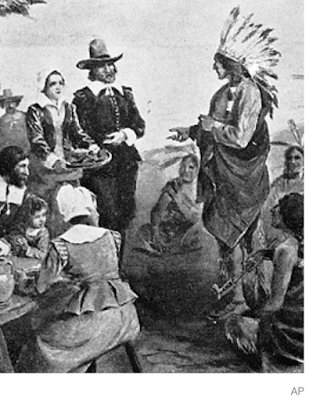 FIRST THANKSGIVING 🍁 The famous pilgrim celebration at Plymouth Colony Massachusetts in 1621, is regarded as the first American Thanksgiving, however, there are actually 12 claims to where the "first" Thanksgiving took place: two in Texas, two in Florida, one in Maine, two in Virginia, and give in Massachusetts. In 1541, when Francisco Vesquez de Coronado and his expedition held a thanksgiving celebration in Palo Duro Canyon in the Texas panhandle.  🍁 The settlers of Plymouth Rock never meant for it to be a feast. They mostly wanted to recognize "giving of thanks" in the form of prayer and abstaining from food, but the Wampanoag Indians, who joined the pilgrims for their 3-day celebration contributed their own harvest traditions of dancing, games, and feasting. This is from their accident festival, Nickommoh , meaning"to give away" or "exchange".  🍁   If it wasn't for the help of Tisquantum, or Squanto (c. 1580-1622) the pilgrims m
Post a Comment
Read more
More posts